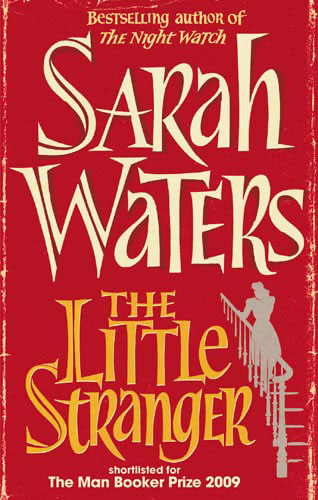 Subtly complicated, The Little Stranger is a slow moving ghost story set in rural England just after World War II. Author Sarah Waters has earned a reputation of immersing her readers in one precise time and place after another and here she has given us a near modern period. Post war England was worn and tired, trying to begin anew after a long struggle. Like the country itself, Hundreds Hall and its inhabitants grapple feebly with a quickly changing culture that has left its gentrified life behind. The house is more and more quickly losing its past glory, nearly falling down around the Ayers, last of the family that has lived in the grand house, worked the large estate around it and garnered the respect of the nearby country population for generations.

The last remaining son, Rodney Ayers is as cracked up and failing as the house after the war and he can’t seem to keep up with the increasing burden of maintaining the house and his genteel mother and spinster sister. Into this sad affair comes local Dr. Faraday, who has had a glancing acquaintance with the house and family over the years. As he becomes more entwined with the deteriorating family and its apparently increasingly hostile house, the doctor is witness to the sad and dangerous events over a tumultuous year.

Ghostly occurrences begin to insert themselves into the family’s lives, destroying their calm and endangering both them and the house. As they begin to slowly accept the presence of a supernatural intruder, the author frustrates the reader through Dr. Faraday’s insistent voice of logic and reason to an almost unbearable level. Fortunately, this is paid off at the very end of the book, which I found reasonable and quietly dramatic.

Sarah Waters has had several films made from her books that are elegantly detailed period stories with unusual characters and situations. The Little Stranger is period, but this time the characters are all well used to the point of stereotypical. The entire book is the opposite of lighthearted, beginning with a weary sadness and going downhill from that point.  Still, you continue to hope for the best, because if you’re like me and Dr. Faraday, you will like the Ayers despite their lingering class consciousness. Once you’ve finished the story every mystery will make sense.

Maybe it’s because I grew up in a haunted house, but the ghostly aspect of the book seemed a little lame to me. I think other readers might get a little more bang out of the story. I enjoyed the smooth prose and flawless historical accuracy, and the end of the book didn’t totally surprise me but it was still very affecting. The Little Stranger is strongest as a fascinating set of character studies in a time of relentless cultural change. I recommend this book to someone looking for a quiet ghost story who can handle unrelenting sadness and slowly building mystery.