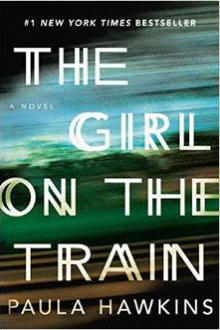 The Girl on the Train

From the very beginning of the book we cannot like Rachel, the titular character, unless of course you are also an alky whiner, pining after a lost Tom, whose house you pass every day on the train to London. I don’t share all of those qualities, so yeah, it was difficult to get on track. I wondered, as I read, just how many people could warm to her and was that really a solid way to begin a book? Just down the street from Tom is the perfect couple, as seen from a train, who she names Jess and Jason. As with everything else in Rachel’s life, these two become an obsession. Her train of thought constantly switches from the Js to Tom and back again as she pops open one 7-11 gin and tonic after another.

Because I had borrowed the book and couldn’t just pick it up again later, I kept reading but Rachel never improved much. There aren’t many characters in the book, and only hers is thoroughly explored, or at least as much as can be past an inconveniently timed blackout that throws suspicion on her and makes every other character around her wish she’d disappear. Seriously, she’s obnoxious.

I would guess that this device is used as a way to dangle a raft of red herrings over first one character then another. With better pacing this may have worked, but mostly I was just trying to push through to the end. The bulk of the book is a languid, shallow and passive examination of flawed people. You get the feeling as you pack more words into your head that things are happening, but when it’s all over and mull it over for the two minutes it deserves you’ll notice that not much really happened beyond Rachel’s aimless wandering and continual hurts, until the end rushed up suddenly and that’s that.

Because of all the hype, what with a movie coming out and all, a lot has been made of the book. It’s not a bad novel by any means, and anyone who enjoys mysteries of any stripe will probably enjoy it on some level. I’m interested in seeing how Emily Blunt handles the Rachel character, but now that I’ve read the book the trailer makes me wonder how the heck they can handle her feckless drifting, though the sudden end I think will work better cinematically. I’ve spoken to some people who loved it and others who agree with my near disappointment, so ride the rails of this modern light mystery if you don’t mind a book that takes a long time to build up steam.

CFR: In Addition: As of the writing of this review, the author, Paula Hawkins’ Website would not load. I find that ridiculous – but I also feel sorry for the author that her site at this point in time was not visible.

One response to “Horrorible Review: “The Girl on the Train””