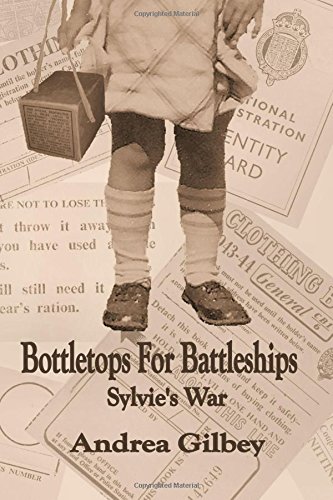 As a holiday gift I received a copy of this children’s book aimed at an audience of eight to twelve years old, graciously signed by the multi-talented author. Because the main character I a little girl in England during WWII, there will be few boys brave enough to read this, I fear, and American girls will need internet access to look up archaic or purely British terms, like when Sylvie has a cupcake with “hundreds and thousands”. (Guess I just outed myself as a non-baker.)

The supporting characters are more deeply drawn that I would have expected for a children’s book, though this is by far not my usual fare, and I felt right at home in the rural suburb.  Sylvie is a very, very good little girl who almost never does anything wrong, which is why I had trouble relating to her. She’s also smart and resourceful and brave, so I suspect she would be a wonderful role model that would warm the heart of any mother reading this book to a youngster. The author told me she has heard the book is very good for reading to very old people in nursing homes, too, as it brings up happy memories of long ago.

Despite the quality writing and how easy it is to get lost in the story, it took me an inordinately long time to read the book because it’s meant for a slightly younger audience than me, so I took to reading one short chapter at a time. Sylvie has a new adventure every chapter, like going to school for the first time, Christmas holiday, a camp out, collecting the titular bottle tops (one of those anachronisms) and because it’s wartime near London a scary chapter involving a buzz bomb. Maybe someday Andrea will write a sequel about Sylvie’s little sister.

If you have children or child friends I highly recommend this book. It can easily be read a chapter at a time and is an engaging story that will teach history and a wildly different culture than we’re used to today, as well as giving you a charming girl to follow and root for over many adventures.