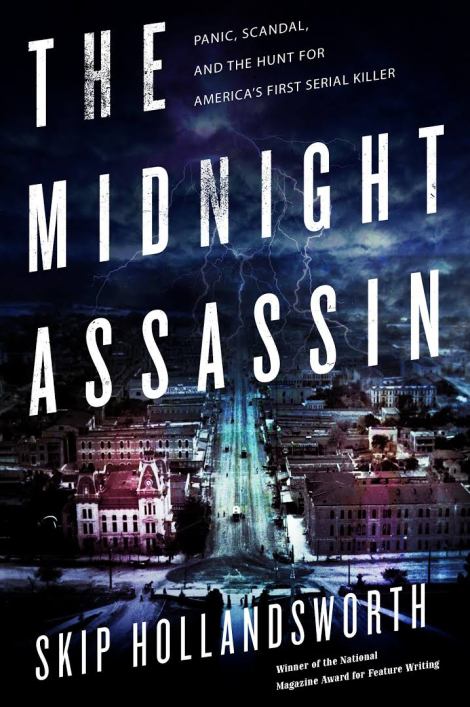 The Midnight Assassin: Panic, Scandal, and the Hunt for America’s First Serial Killer

I whipped through this book pretty quickly because my degree is in history and if you read this you’ll learn a lot about an ambitious Texas town in the late nineteenth century.  This is a place and time in American history that I’m not very familiar with, and this aspect of The Midnight Assassin is okay.  Author Skip Hollandsworth has the benefit of living in Texas and at the back of the book there is a decent bibliography for his source evidence, so its historical worth is solid.  I was enjoying the heck out of it for a while.  But, the main reason I got the book is my interest in true crime of that era, with its utter lack of forensic science. The further into the book I got, the more I noticed it wasn’t totally working for me. I really wanted to like it a lot, and in some ways I did, but the total package wasn’t there. A word of warning. Despite the lack of graphic description or illustration, this is not a book for the squeamish.

Hollandsworth is a journalist with Texas Monthly and has been fascinated with the case since first learning of it.  He wrote an article, and then dove headlong into a large investigation lasting ten years interpreting the miles of microfiche, bundles of brochures and piles of pamphlets. Hollandsworth does a great job of reporting what happened. Unfortunately, he doesn’t go beyond reporting facts, almost entirely about the state of the city, the plight of the politicians, a brief recount of the murders and investigation. While a good deal of the historical information about the city of Austin is interesting, sometimes fascinating and occasionally hilarious to the modern reader, this genre of historical great event, made popular by Eric Larson, usually goes beyond this basic (though detailed) reporting of what happened.

His historical descriptions were entertaining and educational:

As midnight approached, more women were overcome with fear, (“A sound in the darkness makes them unconscious,” wrote one reporter.) At least a couple of women were convinced they saw a man standing by their bedroom windows, well-muscled in the moonlight. Just before sunrise, a meat delivery man accidentally slammed his wagon into a wall as he backed it up to the kitchen window of the downtown Southern Hotel. Two black female cooks, sleeping in an adjoining room to the kitchen, woke up and began screaming, “Murder! Murder!” One of the hotel guests opened his window, pulled out his six-shooter, and began firing away.

Predictably, being in the south just after the Civil War, Austinites didn’t much care about murdered black servants beyond the irritation of fewer women in the city willing to live in servants’ quarters. Duh. But then the assassin murdered a couple of white women and the place went nuts like an anthill stalked by a boy with a magnifying glass.  Now the situation was serious, though the policing didn’t improve.  First thing, the mayor hired the world renowned Pinkerton Agency.  Well, he hired one of them.  Not the right one.

A good part of the book is contemptuous of the police, as well it should be.  The Austin police attempted the use of bloodhounds time and again with no luck. They arrested and beat a score of black men trying to coerce a confession. They trampled every scene, and if they even made so much as a sketch it wasn’t mentioned or shown in the book.  The London police in their search for the Ripper a couple of years later at least left a few scant clues, enough to feed the Ripper frenzy that has lasted well over a hundred years.  The Midnight Assassin must have left a lot of clues, which either weren’t found, or weren’t commented on, or weren’t deemed important enough to keep. That the whole ordeal was an enormous screw up on the part of the police is brilliantly obvious, but it’s not enough to hang a real life whodunit on.

He had plenty of ammunition for police ineptitude, but hangs fire on the book as a whole.  Sure, we get the running joke about the nose blind bloodhounds, and the really not funny series of black men arrested and tortured for a confession, and loads of historical journalistic snark. I wanted a deeper look into the two lame trials, both of white men for the white women’s murder, and both obvious political hatchet jobs. What was missing was trial transcripts, artist renderings, or at least more description than the bullet points of each side’s case.  Throughout the book there are head shots of prominent people and photos of buildings in aid of telling the story of Austin’s growth.  I wanted more about the murders.

At the time there was serious speculation that the Assassin had moved to London and transformed from axe-wielding Texican to a meerschaum-smoking urbanite. All Hollandsworth did was run down the Ripper-lite basics and repeat the theories of the day. To anyone familiar with criminal profiling, it’s obvious the murderers were two different men.  Readers who don’t understand the basics are going to be intrigued with the suggestion but find no enlightenment. This doesn’t do justice to the few people in Austin who were astonishingly close to understanding the serial killer rather than the prevailing notion of “bad blacks” being at the bottom of it.  I would have liked to see some more on that thread. I wanted Hollandsworth to pick some theories and dig deeper than the 1884 evening edition. For instance, one of the things the author points out is that none of the victims were alone when they were attacked. I thought that was a very illuminating point of profiling, but there was no deeper digging.  I missed the modern take on the story. I have a hunch not all the murders were done by the same person, but I’d like to see what a profiler thinks. One of the characters in the book that stood out in my mind was the son of the local insane asylum director.  Could we maybe have used this mathematical model as did the BBC special “The Code: Numbers, Shapes and Prediction” to give us a clue to the killer’s whereabouts?  If “X” marked the spot over the asylum or his home we could have some nice, juicy conspiracy theory going.

There were a lot of famous axe murders in our early history, like the Smuttynose Island Murders and the Iowa Axe Murder. For a moment I considered the latter as a possible Assassin murder, but was reminded it happened in 1912 – probably too long after Austin unless the killer got out of prison, strapped on a walker and hobbled off a train to slaughter the Josiah Moore family before wandering off into the darkness.  It would have been interesting to see a mention of some of the others to enhance the historical groundwork.  I think I want the Director’s Cut of The Midnight Assassin and I’m being too picky.

Hollandsworth’s biggest problem is there being precious little information from the 1880s beyond newspaper accounts. Like forensics, journalism of the day bore little resemblance to modern reporting.  That’s why I think it’s very important to go beyond newspapers.  An example of this is his mention of Dr. Charles Edward Spitzka, who he refers to as, “a brilliant doctor…specializing in the field of alienism, the study of people whose minds had become ‘alienated’ from reality.”  This is what they said of Spitzka at the time, when he testified on behalf of President Garfield’s assassin, Charles Guiteau. Spitzka declared the man, “a ‘moral monstrosity’ who had been driven to kill for reasons beyond his mental control.”  Despite the MOs being different, Spitzka was the one who floated the idea that the Assassin was also the Ripper. This was the word from the dark ages of forensics, when scientists attributed criminal behavior to morals and ethics rather than pathology.  What would a modern profiler or other kind of forensic scientist say about Spitzka’s theory, or any other aspect of the crimes?

Something else I really wanted more of was personal stories.  It’s the sort of treatment that makes Charles Pellegrino’s treatments of the Titanic disaster so memorable, and Hollandsworth needed at least a little of it, but this was the book’s weakest aspect.  How did getting beaten to a pulp by the police every time a body turned up affect the African American suspects?  How did it affect their community? What happened to the careers of the fantastically inept investigators?  For that matter, what kind of speculation existed beyond the newspaper opinion pages?  Because no one has ever written about this killer before, Austin is a carte blanche for the genre, wide open for all sorts of deep theory and speculation.

It wasn’t until the epilogue that I got my answer.  There simply isn’t any more information, says Hollandsworth.

Much of this book is based on hundreds of articles from more than thirty nineteenth-century newspapers. Sometimes the articles were a few hundred words long…sometimes they lasted no more than a couple of sentences…  In my mind, I kept urging those nineteenth-century reporters to ask follow-up questions of city officials and police officers, to do more investigations… Alas.

Also in the epilogue is the answer to why there weren’t more personal anecdotes.  He tells the story of a victim’s great niece, who learns some family history from the author. “She told me that her grandmother had rarely mentioned Eula during her lifetime, saying only that she had been found dead in an alley. ‘And now you are telling me she was murdered?’ she asked.” It’s a poignant moment in the book, and it should have come up a lot sooner than the last couple of pages because it says a lot about how horrific these murders were, that they were so completely and purposefully forgotten by victim families and an entire city.

I definitely recommend The Midnight Assassin to those of you who read true crime histories mostly for interest in different times and places, and to those who prefer a straight up journalistic accounting of events.  It’s not typical in this genre to get such a thing, so you might decide you like it. Hollandsworth did a great job bringing the murders to journalistic light, though he has almost no illustration in the book (maps, courtroom illustrations, etc.).  I had hoped for more speculation on whodunit, because that, too, will teach you a lot about a place’s history, and also at least some modern forensic speculations.  For a trained profiler there is a wealth of information. The book is a little dry for lack of intimacy with the murder victims and investigation victims, which I’m willing to overlook as he has a good excuse.