This Throwback Thursday is also the first 2 4 1 Review. 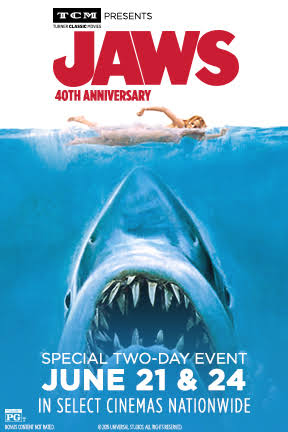 Last week I went to see Jaws at the IU Cinema, and what an absolute treat it was.  I wasn’t into scary movies when it came out in 1975, and so had never seen it on the big screen, with Dolby sound.  The physical viewing of this classic was fantastic, and made the movie scary all over again.  By physical I mean there were about a hundred fans whose participation via applause, cheers, laughter, and occasional screams caused us all to experience every part of the movie more viscerally than popping a DVD into the player could ever manage.

Just in case you’re one of the few people who have not yet seen this film, it is one of Steven Spielberg’s early films and his first huge success. Starring Roy Scheider as the not-from-around-here police chief of bucolic Amity Island, Richard Dreyfuss as the tough as nails shark expert and Robert Shaw as the world’s foremost  shark hater and experienced hunter, it is based on author Peter Benchley’s novel.  A gigantic great white shark summers in the Hamptons and is hunted down in the last third of the movie by the three leads.  Well, there is hunting going on, but humans are pitiful predators.

This long, long buildup to the hunt gives the audience plenty of time to dig a groove in their armrests before ever actually seeing the shark.  There are many reasons the film works so well, beginning with writing that is clear and keeps the story always moving forward.  The music, with history’s most often hummed theme, builds tension and gives obvious clues about what’s going on or coming up. Director Spielberg found excellent actors, with three leads who play totally macho men in three entirely different ways. He also made the camera work for him in wonderful ways, like filming wide shots with busy foregrounds to give everything a 3-D look, and often filming the shark scenes at water level, making the audience feel uncomfortably close to the monster.  One of my favorite scenes is on the beach, as a frightened Chief Brody is trying to watch everywhere in the crowded water from the beach as a man drones on about…something… while kneeling in front of him.  The Chief tries looking to the right and then the left of the man, over his shoulder, over his head.  The man is speaking quite seriously about…something…and his face fills most of the screen, hiding the ocean from the Chief and from US.  WE want to see what’s going on out there and we can’t.  That’s cool enough, but then to have the man’s thirty foot head in the screen for so long and for us to be as unable to follow what he’s talking about as the movie character Chief Brody is sheer cinematic genius.

There was a brief announcement made before the movie started, and we discovered there were actually a couple of people in the audience who had yet to see Jaws.  Two of them were girls sitting in front of me, and I spent a good part of the film curious what they were thinking not only of the old fashioned movie, but of some of the anachronisms like having to walk to the wall to answer the phone, or filing a report on a typewriter. I wondered if they were being thrilled as much as me, but was too busy laughing and cheering and clapping to ever ask them.

OMG. Jaws is so GOOD.

I remember seeing this movie with buddy Marie. I was 11 and she was 10. We went to a movie theater in downtown Bloominton, Indiana (the movie theater is no longer there, BTW) and watched this new movie that looked like fun: Jaws. I must have screamed a lot during the movie because when it was over I noticed Marie was no longer sitting next to me. She told me she would never sit next to me again at a movie if I was going to act like that! I also remember the audience screaming.

The next day Marie and I were sitting on inner tubes in a pond on a friend’s land. Marie shrieked and I swear I saw a Great White Shark rising out of the water to eat me. I thought that this was the end and felt my heart stop. Nothing happened. Marie’s shriek was caused by small Bluegill brushing past Marie’s her leg.

I then saw the movie at least one more time with step brothers and sisters. We sang “Show Me The Way To Go Home” in the back of my father’s truck after the movie on the way home.

Buddy Mildred told me about the movie showing at the IU Cinema so we went. It was so good. So good. In fact I had forgotten how good it was and now appreciated it as an adult.

This is a fabulously made movie. Forget the hype forget this movie being the Birth of the Blockbuster, forget the frothing fans, just go look at the movie. It is damn near perfect.

Back to the perfection of this movie. There is not one second, one sound, one frame in this movie that isn’t perfect. Maybe it is so technically fabulous because the shooting of it ran over – way over time and budget – and Spielberg wasn’t sure he would ever make movie again. Maybe he and editor Verna Fields pulled out all of their combined stops and tricks to cope with the poor footage surrounding the mechanical shark (it was a disaster). Maybe Spielberg is just a genius and Jaws proved it. Yeah, that’s it. This movie is perfectly made.

There is also perfection in the acting. It is so good you don’t think you are watching acting. The three leads: Roy Scheider, Robert Shaw, and Richard Dreyfuss are all magnificent. Their scenes should be used as tools for master acting classes. When you watch the movie notice the following from the actors: They portray their characters through their bodies using personal space, touch, and body posture. Speaking of acting, want to see an outstanding monologue? Check out Robert Shaw as Quint recalling being on the USS Indianapolis – The Indianapolis Speech – Jaws (7/10) Movie CLIP (1975) HD.

There are so many things I love about this movie and so many points to make that I shall now resort to bullets so as not to have this run on forever.

1.) Masculinity/Manhood. We have three strong men in this movie: Brody, Quint, and Hooper. Each represents their own way of being a man, or as one could say it, a responsible adult human in society. It is interesting to watch the men deal with the shark situation according to their own experiences. It is also interesting to see that Quint (Robert Shaw) could be considered a hyper-masculine character who can’t admit when he needs help or when he is wrong. At least at first. Quint’s fate perhaps shows a new man emerging. Perhaps it shows Spielberg’s attitude too.

There is one point when the hyper-masculine Quint tries to intimidate Hooper by crushing a beer can in front of him. Hooper responds by crushing a styrofoam cup. Brilliant. CAN vs. CUP: JAWS 1975 w Richard Dreyfuss n Robert Shaw; Roy Sheider chums hare clip

2.) Heroic Music and Scenes. There are several times in the movie when you feel there is a large victory for our heroes approaching. This is brought on by music and using footage with a great deal of movement. Amazing! These scenes continue to crop up throughout the movie but with less intensity. Well done Mr. Spielberg, well done. Never give away the ending of the movie. Huzzah!

3.) Humor and Fear. Speaking of heroic music you can catch a glimpse of it in these clips: You’re Gonna Need a Bigger Boat – Jaws (4/10) Movie CLIP (1975) HD and  Jaws (5/10) Movie CLIP – Barrels (1975) HD. Yes these scenes run back to back in the movie. And oh but they show you so much about the characters. You see some level of fear in each character – and awe – and Brody’s fear (his character hates the water) about getting anywhere near the edge of the boat and thus nearer the shark reflects the audience’s fear as well. Note that Brody is still a man and not being made fun of for his fear. It is quite understandable!! I think everyone in the audience feels the same way.

4.) Slow Reveal. What I also liked about this movie was the build-up. It reminded me of The Exorcist. The audience knows what is happening but the characters don’t – which makes SENSE! The characters discover the danger and then react accordingly to it in a rational and logical manner. This allows the audience to stay with the story and the characters and not start thinking “What a bunch of idiots” or “What happened to the continuity?”

If you ever get a chance to see Jaws in a movie theater DO IT! Then do it again. It is fabulous.

Last Note: There were two girls in the cinema watching the movie for the first time with their parents. They were 11. Good age to see Jaws, good age.

Jaws in 30 Seconds by the Cast

In the Teeth of Jaws – BBC Jaws Documentary