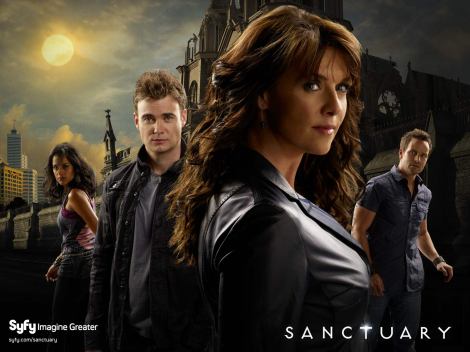 OVERALL: Hubby and I knew we were going to watch this show when we saw on SyFy that Amanda Tapping was making a Web series called Sanctuary. If Ms. Tapping makes it, we will watch. We were not disappointed. 🙂 So gothically steampunky good.

POINTS: It has Amanda Tapping being awesome and saving unloved creatures from an unjust world.

PITFALLS: Hmmm….. Uh SyFy, why did you stop the show. same on you.

FEMALE CHARACTER(S): YES! Sanctuary is the wonderful Amanda Tappings’ baby. So of course she plays the show’s lead Dr. Helen Magnus. So cool. There is also Agam Darshi who plays Kate Freelander, a person who knows about “abnormals” and ends up being very helpful to Magnus and her team. There are also good female characters throughout so go enjoy.

CULTURAL PITFALL(S): Well I would have liked more PoC.

HIGH POINT(S): I love the tagline “Sanctuary for All.” It makes the Unitarian-Universalist Hufflepuff in me very happy. I liked that theme throughout the show too. Very Star Trek, very very good.

RACIAL BECHDEL TEST (Website): 1 of 3 to 3 of 3 depending on the episode. It wasn’t until season 2 when Agam Darshi became a regular was color representation greater than just white.

Photo of Amanda Tapping being awesome in a long coat. Like she does.