I bought this on a whim and tried to watch it, but I’ve been spoiled by modern 3D.  I can watch fairly well for nearly two hours these days before my eyes give out, but the ancient red/blue system wrecks me after about fifteen or twenty minutes. So, I only got about forty minutes in (two sessions).

I had always found the Ft13th films to be, simply, dumb. Maybe I’m getting old and nostalgic, but it was easier to watch this time. I’d never seen this particular title but it felt very familiar, with a very slow buildup to (I assume) lots of gory action later.  The time and place is well fixed, and the stereotypes, er, characters drawn for us. Forty minutes in there was precious little gore. I was very struck by how YOUNG the main characters are *sigh* and how well the director used the 3D aspect of the film. He uses all the tricks – pointing pointy things at the viewer, having something recognizable in the foreground for the audience to look past, moving characters through closed-in areas. This created a much more dynamic feel to the movie than it deserved.  Movie snobs will complain when modern 3D films do that sort of thing, but truthfully I think those tricks look even better in the old system.  Also in aid to the 3D the camera moves a lot and is positioned in places it wouldn’t normally be in a cheap film (like near the floor with a table in the near foreground), which gives it a more dynamic feel than it deserves.

Ironically, the one thing 3D doesn’t seem to do is enhance the actual slaughter scenes (at least the ones I saw) because the old format doesn’t seem to follow very quick motions well enough to be recognizably 3D.  I would pay to see this in a modern theater, with the old 3D redone with the new technology. 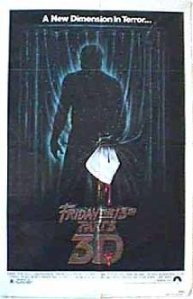