Hello. Yes this is an odd title post. It came about because I found this article in my The Mary Sue news feed: BBC Accidentally Leaks Doctor Who Series 8 Scripts, Asks Fans Not to Ruin It for Each Other. In this article the BBC has asked that you NOT Google or look for the scripts and please DON’T share with anyone else!

I must admit I desperately want to find the scripts and read them. Would I tell anyone about them? NO! Out of respect for the Doctor Who production staff I would never do that. I would also never leak a script. I wouldn’t be able to live with myself. Call it park of my my Webmaster Honor Code. I feel if I did leak a script or important information I would have to commit ritual seppuko – then who would edit this blog?  Therefore I do not do such things.

I would really like to go find the Doctor Who scripts and read them. So now before I dive into the glory of the Internet (and probably come up empty handed), I shall explain the title of this post.

SPOILERS don’t affect me. I am immune thanks to an accidental “vaccine.”

*SPOILER ALERT CONCERNING THE EMPIRE STRIKES BACK]*  You’ve been warned.

I got this vaccine while sitting in the floor of my living room. It was the summer of 1980 – the summer The Empire Strikes Back came out. Being a HUGE Star Wars fan I was eager to see the movie and had scheduled with a close friend a road trip to see the movie on the weekend. Some friends of some friends were visiting and they had seen Empire. One of the people blurted out “When Darth Vader tells Luke he is his father I was in shock!”

And I knew at that moment that no spoiler would EVER ruin a show for me again. I mean, the Great Mother of All Plot Twists just slammed me like a ton of bricks and I was still standing. Didn’t even had a nose bleed.

So there you have it. Bring on the SPOILERS! They will NEVER ruin my enjoyment again!

Oh and BTW, I didn’t share the SPOILER with anyone. I kept that plot twist to myself. 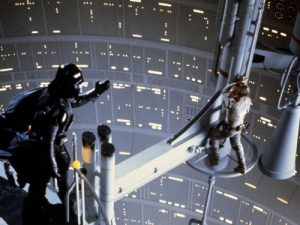