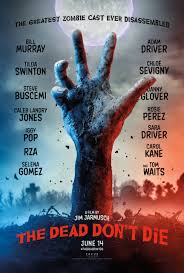 CFR: In Addition: I know it is odd to start with an In Addition, however, I must. We must! This is not the first time The Dead Don’t Die has been on the site. I enthusiastically talked about the trailer here: TRAILERS: “DEAD DON’T DIE”. Mildred and I were so excited about this movie!! I mean great cast, edgy writer/director, what could go wrong? All of it. No really. All of it. It was such a shame this movie wasn’t as good as the trailers promised. It could have been great. Instead, if was a huge disappointment. I think this is because writer/director Jim Jarmusch doesn’t know how to end a story. Just me.

Thanks to Mildred for taking one for the team and actually writing about the movie. I salute her.

Be sure to get your CD of The Dead Don’t Die, a catchy country tune that plays over the opening credits and comes back to haunt the movie again and again. And again. In case you don’t notice that it’s the theme song, one of the movie’s characters makes sure to say it as they stand around stiffly talking past each other, “It’s the theme song.”

Was that supposed to be funny? Hard to say because nothing works in this film. As the actors stand around rigidly they speak in a monotone to a point in the distance off camera instead of to each other. The dialogue is stilted and meanders around as disjointedly as a zombie. When the twangy theme song isn’t blasting out of a car radio there is very little music and the sound is muted as if they filmed with a quilt taped onto the boom mike.

Listed in the imdb as first a comedy, then a fantasy, then a horror, The Dead Don’t Die is a cold blooded mess from beginning to end – especially the end, which is as bad as the end of a Stephen King novel. Polar fracking has screwed up the Earth’s tilt and rotation and whatever, causing the dead to rise and head toward whatever they favored most in life, as in the original Dawn of the Dead where we first heard, “They’re after the place. They don’t know why, they just remember.” For this movie, it’s off to the café for coffee, unless you’re a kid zombie and want that new toy just in off the WU-PS truck.

Was that funny? Yeah, almost. Maybe if the director didn’t take twenty minutes telling that lame joke. Mixed with the tardus corporeal humor are many images and ideas from the first two George Romero zombie films, with the notable exception of them immediately referring to the undead as zombies. There are many kinds of undead, which has long been a Romero staple, from the “hipsters from Cleveland” who drive into town in their 1967 Pontiac LeMans to grandma in her nightie to the town’s painted lady. Other images you’ll notice is the boarded-up door with fingers reaching through, tv graphics that mirror that of the original Night of the Living Dead’s black and white tv PSA and dead hands slapping onto fogged over glass as in Dawn of the Dead. It’s all very pat and screams of “Look at me! I’m an auteur who watched a zombie movie!”

For a bare moment, after the interminable and suspenseless lead up to actual zombies digging their way out of the grave to make it an actual zombie movie, it was kinda funny. (Zombies don’t do that in movies, by the way, except Children Shouldn’t Play with Dead Things). And then back to the aimless nothingness of dialogue that regularly broke the fourth wall in what I suspect was another attempt at humor until the characters’ stilted inactivity was cut short by the closing credits. I’ve rarely been happier to see those come up.

So we have a zombie movie with not much zombie action and even less fighting of zombies, with a slew of big name actors (who I will mercifully not embarrass by mentioning them in this review) moving, driving and speaking more slowly than the dead with lines like “Was it wild animals? Several wild animals?” repeated by several characters like a round of Row Row Row Your Boat. When we finally get to the end the movie becomes both ridiculous and ridiculously predictable, and then you go do shots to get it out of your head.

Was it funny? No. Was it horror? No. Was it fantasy? On maybe a grade school level. This movie should win an academy award for most misleading trailer, and then be buried at the bottom of the polar fracking.

One response to “Horrorible Review: “The Dead Don’t Die””