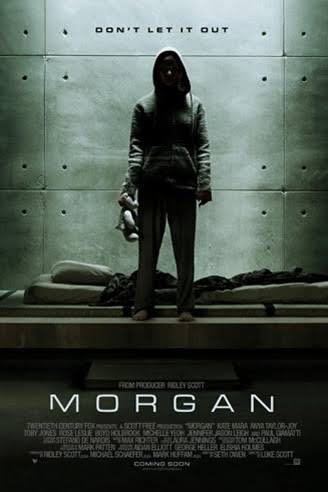 I know that CFR reviewed* this movie a couple of years ago, and I’m glad I missed reading that review because this is another case of us liking a movie differently. I’m also glad I didn’t watch the trailer first, because it’s a typically Hollywood misdirect of what Morgan is, which is a quiet study with occasional violence. While watching it I kept feeling a similarity to Pontypool in its difference to other movies with similar themes.

Morgan is a scientifically devised proto-human cooked up by a gang of scientists working on a secret government project. This is not a terribly original idea in the science fiction world, but what they’ve done with this hackneyed storyline was interesting enough to keep me watching long enough to get into this story. Morgan, the name of the construct, is five years old, raised from a baby by this gang of scientists. She looks about sixteen and has powers they don’t really discuss much with the government auditor Lee Weathers, who is visiting to find out why Morgan poked out the eye of one of her adoring scientist parents.

The small, quiet auditor is played by Kate Mara, and she doesn’t say much so you really can’t get a handle on her, but you eventually discover she’s pretty tough and dogged in her approach to appraising Morgan. As CFR mentioned in her review, the casting did seem a little odd but turns out to be perfect. Kudos to the casting director.

I was pleasantly surprised by some of the choices made in makeup and cinematography, like differentiating Morgan from regular humans only by way of making her skin a pleasant gray that isn’t terribly obvious right off the bat. She’s housed in a large room with a two way glass viewing wall across one side, which the director used to superimpose Morgan’s reflection over the Lee’s a couple of times.

Morgan also reminded me of that old Twilight Zone episode with Bill Mumy, “It’s a Good Life”, where the little boy with weird powers sends people who offend him out to the “cornfield”. Morgan plays with the also hackneyed theme of scientific hubris, and again twisted it just enough to be interesting. The obsequious fawning of the Twilight Zone townsfolk toward the boy felt somewhat like the scientists’ reactions to Morgan. Their many professions of love and continual description of Morgan as “special” always seemed a little off, which made me super curious to stay with the movie despite its slow pacing for most of the way.

Once I settled into the quiet and slow moving movie, I enjoyed it quite a bit. Watching the well deserved outcome of creepy scientific hubris is always satisfying, and it was great to see tiny Kate Mara in an intense fight scene. One thing Hollywood does seem to be thawing on is letting the women be tough a lot more often. The very end of the film is a great science fictional gotcha that could mean more than one thing. I recommend this movie if you don’t mind deliberate pacing and a clever rehashing of old themes.

*CFR: In Addition: It is always good to share different points of view!!!