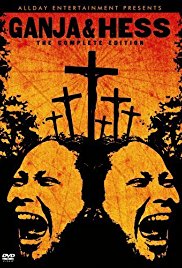 Not a movie about a Nazi selling dope, Ganja & Hess is billed as a vampire movie so when I popped it into the player I thought I was going to see a vampire movie. Silly me.

Being a big fan of Night of the Living Dead I decided to try another Duane Jones movie and rented Ganja & Hess. I did watch it all the way through and consider that a victory for a shallow, linear-brained person who grew up watching Disney movies. The best short description for this 1973 movie is a Blaxploitation vampire art house film. On first viewing I found it massively languid in pace, with sometimes odd blocking, occasional endless monologues, funky 1970s doublespeak that I didn’t understand then, either, and music that sometimes competes for the viewer’s perceptions. It meanders aimlessly from one scene or image to another, challenging the viewer to keep up with a highly impressionistic story. Despite it being about a man cursed with a blood addiction, the nastiest scene involves a man brushing his teeth.

Fortunately, I watched the movie again the next day for the commentary, and seeing only the images without the distracting bad foley, dialogues and music, and with a few hints as to what was going on, it made a lot more sense. As well, I discovered I had completely misunderstood a crucial scene which made the whole movie more understandable. Duh.

Duane Jones only made a few more movies before his death at age 51, most of them unfortunately for Jones of the horror movie variety, as he hated the thought of being typecast, and few in the starring role. After Night of the Living Dead, this is probably his next most famous role and he fits it perfectly, playing a brilliant, sophisticated professor of anthropology and geology with an estate and a chauffeur for his Rolls. The chauffeur tells us that the good doctor is addicted to blood, and this is where I got lost because I thought he meant the guy was already a vampire.

Ganja & Hess is divided into three parts, Victim, Survival, and Letting Go, and is actually a film with strong messages about the dangers of addiction and the unforeseeable places it will lead you, using biblical images and messaging, classical and African art, and music from 70s technopop to spiritual to Bach to enhance the message.

As with Night of the Living Dead, Jones was again starring in an historically significant film, this time for not only being an African American star in a feature horror film, but for being a part of a creative team of African American filmmakers, including its Director of Photography James Hinton (1916-2006) Hollywood’s first black cinematographer. A significant contribution to film was his insistence that some actors’ darker skin tones NOT be lightened. Another Jones film restored by the Museum of Modern Art, if you do decide to check it out be sure to get this copy and not the chopped-for-the-drive-in versions. There are a few in-your-face sex scenes used to market these copies, as well as an extended male full frontal nude scene, which was another groundbreaker.

There were also a few innovations in Bill Gunn’s screenplay, like Hess stealing blood from a doctor, maybe the first time this was seen in a vampire movie and done again to great comedic effect in Buffy the Vampire Slayer twenty years later. He also was sure to have a beautiful African American actress in the role of Ganja.

If you enjoy art movies definitely check this out, or even if you don’t, and be sure to pay attention, especially to the music at the top of the film or you’ll get lost like I did.  I will admit to some lingering confusion about the very last scene, but I have a fond memory of Ganja & Hess after taking a deeper look on second viewing.

CFR: In Addition: Sorry this is late. My total bad. Plus: LOLOLOLOL! Just reading about this movie makes me laugh.