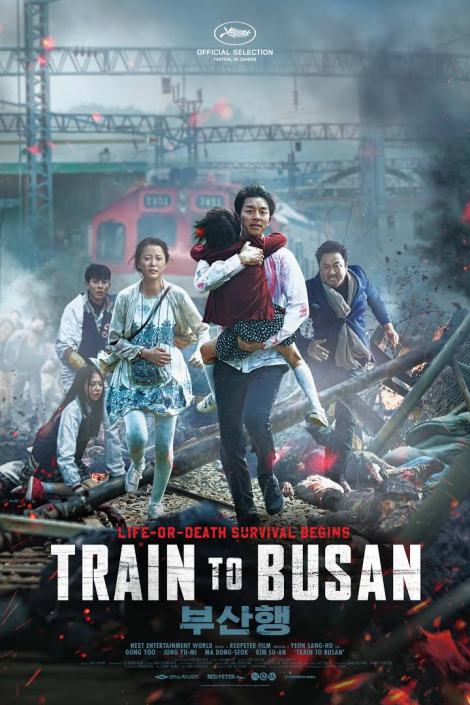 What a ride, man! This Zombie World Tour takes us through scenic South Korea on a bullet train o’ zombies. We begin with a traditional “small leak in the biotech zone” and a super creepy zombie deer that I wish they had covered in the special features. I want to know how they did that.

Seok Woo is one of those detested financial guys who wears snappy suits, bosses people around and makes a hundred life changing decisions with nerveless abandon before his first coffee break. When he finally gets home to a gleaming, modern apartment, his affectionate mother/nanny and adorable but sad daughter Soo-an, it quickly becomes apparent that he’s a typically clueless guy when it comes to affairs of the heart. Soo-an finally persuades him to take her to her mom’s house in far-away Busan for her birthday, though he has yet another important business deal. The next morning they’re off before the sun is up and on the way the slippery tendrils of social media begin to worm their way into the story, and a near miss with a speeding convoy of wailing fire trucks makes dad say, “Looks like something’s going on.”

Though it might seem like a slow start to some viewers, I think the pacing is near perfect in Train to Busan. Starting slowly on the ground level of normal life, uncomfortable images begin to leak in around the edges, cranking you up the slope and making you more and more uneasy until suddenly you’re streaking down into chaos on the roller coaster train to Busan. We are also treated to sweeping vistas of gleaming, doomed Seoul, the bucolic trail to the sunny southern coast, and intimate visual portraits of a father and daughter who aren’t quite connecting emotionally.

All the classic zombie tropes are on display. There are visual nods to classic images like The Walking Dead’s horse ride into Atlanta, as well as dramatic nods to Night of the Living Dead. Train even has its very own maddening version of Harry Cooper in Yong-Suk, whose bullying cowardice gets way too many people killed. Social commentary is on the front burner of this story, as the daughter discovers from hulking, snarky Sang Hwa that people hate guys like her father, and she begins to fear he may be a big ole selfish chickenshit. That’s tough when you’re ten.

Another well used zombie trope is social media, with a couple of clever tricks and one funny moment that nails the modern era as we see a train car full of terrified travelers all googling “zombie” on their phones. Another scene had a clever rider breaking the zombies’ line of sight with their prey by slapping newspapers onto the glass door and splashing them with water to make them stick.  I say that’s brilliant use of social media, and it also demonstrates an unusual character trait. People pay attention to what the zombies do and react accordingly. Most zombie fiction (*cough*thewalkingdead*cough*) has maddeningly stupid characters, but South Korea’s strict gun laws make it unlikely they’ll find a spare 9mm lying around, giving writer/director Sang-ho Yeon leverage to make it really tough on everyone.

The film is well directed, from cinematography to frenetic action sequences and quiet character studies. The acting is top notch, especially Soo-an, who is a very good little girl, though sad without being bratty. There are moments unique to zombie fiction in the film, like none of the multitudinous zombies being killed. Before I would have thought that ludicrous, but it made Train even more scary.

I could go on about what I liked about Train to Busan, but I think you get the idea. See this movie if you ever get a chance. It’s scary and beautiful and has an ending that will leave you on the edge of your seat.

CFR: In Addition: Mildred has told me many times how good this movie is. After watching the above trailer and reading her review, I know that when she brings it over for a horror party, I am gonna love it! And will then need to cuddle my poodle in order to calm down. 🙂