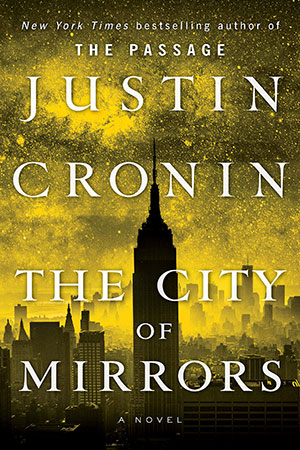 The City of Mirrors

from The Passage trilogy

Having bitten off more than I could chew, I wasn’t able to finish reading The City of Mirrors in time to have a review ready last week.  In my defense, it’s because it took me forever to slog through the middle hundred pages of Cronin’s crowning book of a trilogy that I told you to read, which I now regret having said. After six years waiting to finally see how this story ends I was excited to crack the book and begin, despite the somewhat lackluster middle book.  And I began to read.

Wait, what? After years of anticipation, we begin with a couple of surreal scenarios that are believable enough that, when we’re suddenly yanked back to the “real world” the change can make your head spin like Regan on crack. When the spinning stops the reader is in another time jump to a few years after the end of the second book.  The characters we spent so much time with in the first two books, who began as a close knit group of family, friends and lovers, have for the most part drifted like drops of oil on water and lived very different lives by the this point.  They’re all grown up now and have careers and children and grandchildren of their own.  The ginormous town of Kerrville, Republic of Texas, is where nearly all remaining humans in what was the United States now live, and they’ve been safe so long they begin to leave the nest and recolonize outside the town walls.

Of course this is a big mistake, and one we take up again a HUNDRED pages later after we travel inexplicably back forty years before the beginning of the first book.  This is where my reading screeched to a halt while I struggled through page after page of a whiny guy with shitty parents who goes to Harvard and learns how to party hearty with a cheap tux and pink bowtie. We’re treated to reams of college banter and myriad side stories inside the side story and all to be sure we know our ultimate bad guy really, really well. This character, who was VERY briefly introduced early in book one, now has his very long backstory in the middle of book three.  Is Cronin justifying his evil? Garnering sympathy through our understanding? As the evil, brooding vampire Zero thinks himself to death while killing everyone in the world out of spite, we can only think to ourselves – who cares?

The story, which has always hovered much closer to Grim than Lighthearted on the scale, is pretty unrelenting in The City of Mirrors once it finally resumes, and shows its religious highlights more clearly with many allusions to heaven and character nicknames like Greer The Man Of Faith.  Again, Cronin has his characters using old technology a hundred and thirty years after the latest whiz bang gadget rolled off a modern assembly line.  The only industries humankind can manage at this point are whoring, moonshining, and bullet manufacturing. Again, Cronin introduces us to a passle of new characters that we have to absorb before he slaughters them.  He’s actually so ruthless that I began to feel a slight frisson of tension, before he backtracked again to tell even more of vampire Carter’s backstory.

Okay.  Here’s the weird part, and you may not believe me when I say this, but I’m conflicted over The City of Mirrors. As you may remember, I’m not averse to delighting in books and movies that really suck. There are a lot of characters in these books, and you’re with them a long time, and you will be engaged in a lengthy examination of every trivial aspect of their lives. Even the unnerving and unending timeframe contortions don’t detract from your bonding with at least a couple of these people so that when you finally – FINALLY – get to the end of the trilogy, it’s a series of heart wrenching finishes.

Followed by the Lord of the Rings style second and third endings. I read one review that tells people to not read the epilogue and I will say that you could do that without injuring your reading experience.  It’s both maddening to the point of actual screaming and sweetly heartbreaking at the same time.  I did say I was conflicted, right? You will feel the heavy hand of history in every part of all three books, and as any good historian can tell you, there’s a natural pathos to that and Cronin exploits it to the fullest. At the very, very, VERY end of the book he leaves us with a, for me, satisfying finish.

You may love this trilogy to pieces and think I’m crazy.  The prose is easy on the ears and that may be enough for you.  There are a LOT of characters and the action covers over a thousand years of human existence when all is said and done.  Some of that action is hot and heavy with moments of terror.  Cronin doesn’t exactly have a high regard for humanity as a whole and you may enjoy that level of cynicism.  So go for it, spend a month on it. Just don’t say I told you to read it because it’s all very 50/50 for me.

CFR: In Addition: I both feel sorry for Mildred and am remembering the laughs I had as she told me about this book and this review. It is really bad when  story you love starts to, for lock of a better word, suck. Sorry Mildred! But it did lead to one fine interview and good laughs for me.